Read carefully before throwing your boomerang: 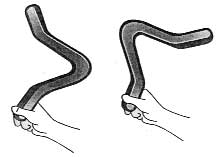 HOW TO HOLD IT

The curved or decorated side should be held towards you and the flat side away. The easiest way to grip the boomerang is to make a closed fist and insert the boomerang between the thumb and first finger. Make sure the boomerang is cocked back along your arm for maximum spin. The “elbow” can be pointing either forward or back as shown. see which grip suits you best. 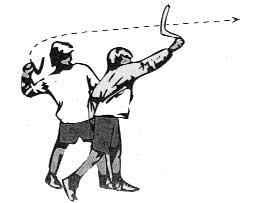 Throw with a normal over arm style facing 45 degrees to the right of the wind (to the left if you are left handed). Aim the boomerang at a point on or just above the horizon. 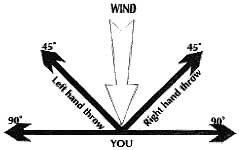 ALLOWING FOR THE WIND

Throw to the right of the wind about 45 degrees (to the left if you are left handed) so that the breeze helps the boomerang come back. By throwing from the same spot and aiming for an object in the distance, you can adjust the throw angle to the wind.

NEVER THROW IT LAID OVER FLATWhen thrown correctly the boomerang will fly in a circle with the highest point of the flight at the furthest away from you, and then hover down slowly nearby. 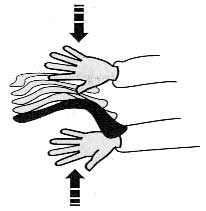 Catch it between you hands in a clapping motion as shown here as it hovers down near you. Aim for the central section of the boomerang and avoid contacting the fast moving wing tips.

Never try to catch a boomerang that is diving or moving fast. Catching should only be attempted when the boomerang is in a stable, slow moving hovering flight and after it is below shoulder height.

Some throwing errors come up again and again. Here are the classics, and some ways to avoid them:

A boom’s flight can be greatly influenced by the tuning of the boomerang itself. First off, don’t try tuning a boomerang until you can throw decently, and consistently (unless you KNOW the boomerang is poorly tuned). You will not be able to assess the effect of your tuning if there is no consistency between your throws. Concentrating on tuning to the detriment of throwing technique will get you nowhere.

The following adjustment tips are easy to do. you’ll be amazed with the results, once you begin practicing how to adjust your boomerangs.

The control wing of a boomerang is the lifting wing. . The other wing is called the “dingle wing”, and is the trailing wing and is seldom adjusted (unless it’s badly warped).

1. If the boomerang dives down as it begins its return back to you, try bending the control wing . . . UP. This adjustment causes the boomerang to rise and hover much closer to you.

2. If the boomerang turns back too soon, seems to rise too fast, or needs more outrange, or the wind conditions are too strong, bend the control wing . . . DOWN, or simply put, whatever you do (bending/twisting) to one wing of the boomerang, the result takes place at the other wing.

NOTE: As you bend each wing, you will need to adjust the TILT ANGLE.

CAUTION: Use only slight bending and twisting, when first adjusting your ‘rang’. You might break your boomerang! Never adjust any boomerang in cold or freezing temperatures! Adjust boomerangs at your own risk.
Another way to adjust the flight of a boomerang is by adding weights, flaps, or drilling holes in the boomerang. On days when the wind is just slightly too much, rubber bands can be added to the boomerang to act as a kind of flap, this adds drag and slows the boomerang down as it comes around.
Click here for a print sheet of Troubleshooting Tips (pdf file)

WARNING: Please read this before purchasing or using any boomerang
Boomerangs are dangerous, when used improperly. Responsible adult supervision is recommended for youth throwing at all times!

NOT RECOMMENDED for use on playgrounds, and such places where other people, pets, or objects may be struck.

DO NOT USE IN WINDY CONDITIONS. Boomerangs are uncontrollable under these conditions. Never throw in such a manner so as to cause possible injury to other persons or objects. WINDY . . . GO FLY A KITE!

THROWING AREA RULE OF THUMB: (an approximate guide only) Allow a distance of not less than 2-1/2 times the out range of the boomerang you are throwing from you to the nearest person or object, or a circle of a radius of 2-1/2 times the range of your B. Allow not more than 3 persons to throw from the same general throwing area.

CATCH AT YOUR OWN RISK!

Your boomerang should fly more or less as depicted in the picture. Some models fly higher with a nice a hover at the end. 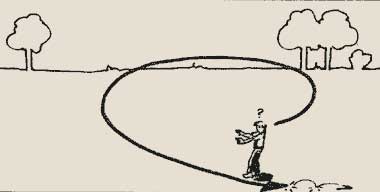 Lands to your left:

Throw further to the right (relative to the wind). On calm days: throw with reduced layover. 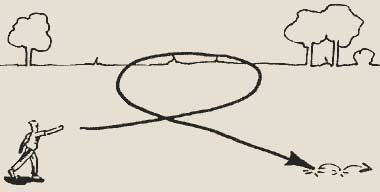 Lands to your right:

Throw further to the left (relative to the wind). On calm days: Throw with more layover. 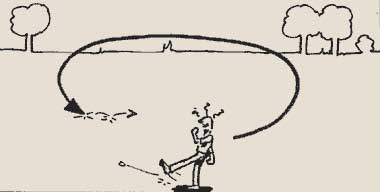 Lands in front of you:

Throw with more power and/or spin. Try throwing lower or with a little more tilt. 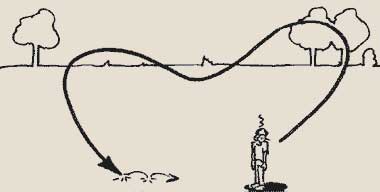 Flies up then swoops, recovers and lands short:

Aim the launch lower — i.e. don’t throw the boomerang up in the air but more towards the horizon. 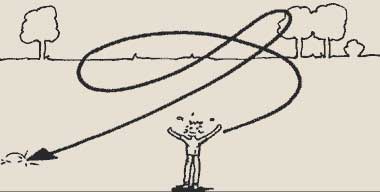 Comes back high overhead and hovers away: